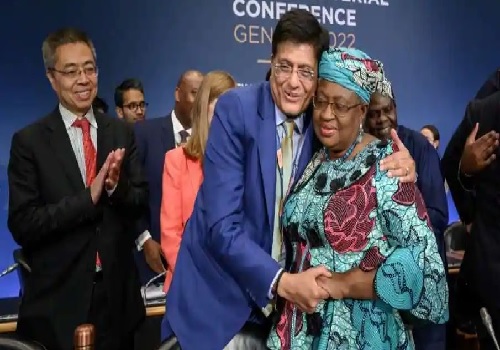 Important Takeaway from the conference were Curtailing harmful fishing subsidies in which the WTO passed a multilateral agreement that would curb harmful subsidies on illegal, unreported and unregulated fishing for next four years. India was successful in negotiating subsidies that could have hampered small-scale artisanal and traditional farmers. WTO agreed that they would not face any restriction. Also,India’s key demand to allow it to export food from its public stockholdings to other countries will reportedly be discussed only in the next Ministerial Conference in 2023. Moving forward next agenda was Covid vaccine. Agreement was agreement was originally put forward by South Africa and India in 2020. This agenda comprises temporarily wave of intellectual property patent on COVID-19 vaccines without the consent of patent holder for five years. This has been strongly opposed by rich pharmaceutical companies.

Concern on global food security was also raised. Geopolitical situation has created a food shortage and rise in prices of food. So members decided to avoid bans on food export. However countries could restrict food supplies to ensure domestic food supply. E-commerce transaction was also discussed in MC12. Member countries agreed to extend moratorium on not imposing custom duties on electric transmission (ET) until MC 13 to maintain certainty and predictability for business and consumers. In spite of many critics India marks its satisfaction with the conference. India made a strong pitch for protecting the interest of the developing or under developed countries at World Trade Organisation conference and ensure full cooperation with other nation.