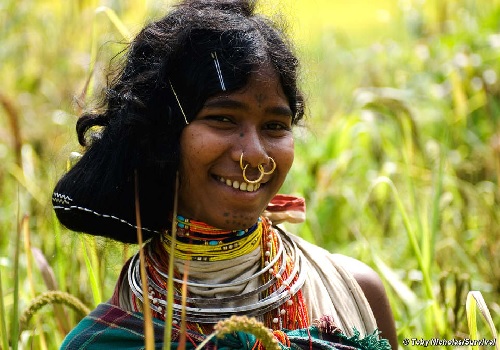 During a protest at Jantar Mantar over demand for a separate religion category for Adivasis, Mahendra Dhruva, a tribal activist from Bihar said that “if you look at the statistics of all the censuses of the British era from 1871 to 1931, there was provision for tribes to choose ‘Aboriginal’ as an option. After independence, the government removed it, so that tribes are counted as ‘Hindus’ or followers of ‘other’ religions. Most of the present day tribal activists use this argument to justify their demand for a separate religion category under ‘Aborigine’ section. So, what is the truth behind Britishers introducing an Australian terminology in India?

Before dealing with the terminology ‘Aborigines’, Lord Macaulay must be mentioned here. Macaulay is known for playing an important role in introduction of western education system in India, thereby giving superiority to anything related with English culture over regional culture/curriculum. His arguments were published in ‘Macaulay’s Minutes’ in 1835. This led to the systematic wiping out of traditional and ancient Indian education and vocational systems & sciences. During the first war of independence of 1857, Hindus and Muslims showed exceptional unity which made Britishers realise that they could not rule peacefully unless there was division amongst Indians. By inciting communal riots, they succeeded in creating differences amongst Hindus and Muslims. The next big challenge was to divide the Hindus. At this crucial juncture, Britishers came up with the idea of creating a rift between Adivasis and non-Adivasis by introducing the term ‘Aborigine’. They targeted two goals by classifying Adivasis as ‘Aborigine’. First, they made Adivasis believe that they are a separate block and have different identity and secondly, they started large scale conversion amongst the Adivasis who were easy prey after being separated from the larger non-Adivasi masses. Large scale conversion of Adivasis in the tribal belt of Jharkhand, Chhattisgarh and entire North-East etc testifies to the above theory.

India has travelled a long way since the days of PL 480. Now, many South Asian countries look towards India for leadership. A nuclear power, India is developing fast and is expected to come at par with developed countries like America, Britain and France etc. within a short span of time. The western powers have realised that this fast pace of development can only be checked if internal disturbances are created in India. Those raising the issue of a separate religion code for Adivasis are playing straight into the hands of western powers. A separate tribal religion would help the western powers in facilitating large scale conversion of Adivasis into Christianity. This can be understood from the fact that almost the entire North-East India and a sizeable portion of tribals from Jharkhand, Chhattisgarh etc have converted into Christianity. Using the influence of Christian missionaries in these areas, western powers may try to destabilise India internally and thereby create hindrances in its path to progress. If reports are to be believed than missionaries and their western masters have also been found to be eying the vast mineral wealth of the tribal areas.

Epics like Ramayana are filled with examples where Adivasis have helped the Hindu Gods/Goddesses in performing their duty. Shabri offering berry (Indian date) to Lord Ram, Kewat offering his services to Lord Ram while crossing a river etc, are known to majority of the Indians. Ramleela is performed in many tribal areas across the country. Adivasis were always considered part of the Hindu religion since ages. Nature worship, Gotra system etc are common in Adivasis as well as Sanatanis. There are plenty of examples where Bhil and Gond tribal rulers constructed temples for Sanatani deities. Some of the Bhil tribes are considered as Rajputs.

If India is to beat countries like America, China, Western European countries then it needs to stay united and focus all its energies on developmental front. Issues like separate religion code for tribals would only weaken the country from within. For those who do not understand the complexity, there are 100s of tribes in India. Religions are assigned code from 1-6 (Hinduism, Islam, Sikhism, Jainism, Buddhism, Christianity) based on caste census is carried out. Imagine assigning 100s of more codes for each tribe. Apart from making the process complex, what will the tribal activists achieve? If one considers the demand of tribal activists of granting the status of religious minority to tribals, a possible after effect may be that they would lose numerous ST benefits which are helping them presently in their overall development and empowerment.